Kisakye knew something in her body had gone terribly wrong. She had been suffering much pain, uncertainty, and fear for a long time. She sat anxiously in her doctor’s office, her hands fidgeting. The doctor appeared with a somber expression on his face and delivered the terrible news to Kisakye: she was suffering from Tuberculosis and HIV.

Feeling helpless, and with nowhere else to go, Kisakye began attending church services at Busamaga Church in Uganda. After weeks of going to the church for comfort and prayer, she sensed the Lord saying that He would take care of her. When she visited the doctor again, a miracle happened. The doctor stared at her paperwork in disbelief. He could find no signs of disease! With tears of joy, Kisakye ran out of the hospital and headed directly to the church to deliver the good news. Her friends and family rejoiced with her as Kisakye danced before God, praising Him for her healing. 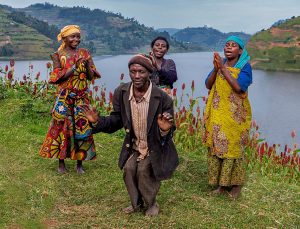 How did this happen? How was Kisakye healed from these terrible diseases? It’s because a small group of believers at Busamaga Church prayed for her, and God healed her. This small group, and others at Busamaga Church, have been growing in their faith through discipleship training. They meet in small groups to discuss Bible lessons from ICM’s Foundations program. While in these groups, they fellowship with one another, share their struggles, and pray for each other deeply.

Thanks to you, people in churches around the world have an opportunity to become healthy disciples. Many people like  Kisakye have found healing in a healthy church. And it all starts with the Foundations program.

Give a gift of salvation.

Rejoicing in a New Life

Fifteen-year-old Sally** couldn’t stop crying. As she settled into the back of the rescue worker’s jeep with her 1-year-old infant, sobs continued to break from her throat. For a very long time, Sally had been enslaved as a sex worker at a Filipino brothel, and she was on the verge of taking her own life to escape the physical and psychological abuse. Rescue workers had found her with a wire wrapped around her neck, about to cut off her air. 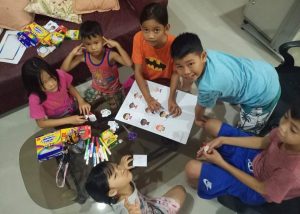 With nowhere else to go, the rescue workers drove Sally and her baby to Antipolo Orphanage. For the first two days, Sally refused to eat or speak to anyone. But as the orphanage staff shared the love of Jesus with her, she began to open up. By the third day, she ate her first meal. Slowly, her true personality began to shine through. She began to smile, laugh, and interact with the people around her. After a couple more days at the orphanage, Sally accepted Jesus as her Savior. After receiving Him, she said, “I believe God brought me here for the purpose of saving me. I now have hope for the future.” Today, she prays every day for God to save her earthly father, who is a wicked man.

In some areas of Southeast Asia, many young women like Sally are still forced into prostitution. But your support for ICM churches, orphanages and Hope Centers offers them a way out and a path to healing through Jesus Christ.

With your help, we can give even more people the chance to be saved, loved, and ministered to. Your Christmas gift can help provide another Hope Center that will feed, clothe, and disciple vulnerable families in at-risk communities.

Give a gift of hope.

Transforming the Life of Madina

Madina**, a single mother living in western Tajikistan, stared in disbelief at her injured hand. A sudden accident at the factory where she worked had cut it cleanly in half. While not a life threatening injury, it signaled an immediate end to her factory job. With most blue-collar jobs in her country requiring two hands, Madina knew she would now struggle to feed her two children.

For Madina, work was a way to escape her childhood memories of Tajikistan’s civil war. As long as she was earning an income, she could ignore the devastation around her and dream of having a better life. Deprived of that option due to her injury, she fell into despair and turned to alcohol for comfort. Her children followed her example, which led them down destructive paths in adulthood.

Eventually, Madina started taking her grandchildren to an ICM-supported church to try to salvage her family, but she herself remained very cold toward the Gospel.

One day, tragedy struck Madina again. She fell from a balcony, hit her head, and lost sight in both eyes. The accident caused her children to drink even more. Madina sat helplessly in her home, feeling bitter and angry toward God. 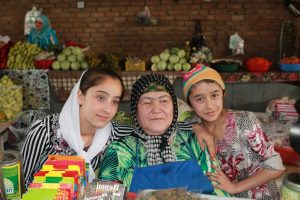 The pastor from the local church she had been attending with her grandchildren came to see her. His heart broke upon seeing her frail condition. After chatting with her for a while, the pastor told Madina that she needed to make things right with God. He asked what she would do if the Lord brought back her sight. Madina said she would put an end to her worldly lifestyle and would be baptised. A few days later, a family from Germany who knew Madina from her younger years called the pastor. They learned about her situation and decided to pay for her eye surgery!

Madina’s sight was completely restored. As promised, Madina received Christ into her heart and was baptized. She stopped drinking and changed her lifestyle. She is now faithful in reading the Word and volunteers at the church. She hasn’t missed a church service since then.

Your gifts and prayers greatly impact people’s lives around the world. People like Madina are rejoicing in their local church thanks to your support! Will you give other churches a chance to change lives this Christmas?

Give a gift of fellowship.