You might have heard a few weeks ago on social media about a large baptism in Central Thailand. The baptism, possibly the largest in Thailand’s history, saw more than 1,400 people make a public confession of their new life in Christ. The event is noteworthy because, for the first time in nearly 200 years of missions work, the Thai people are responding to the Gospel in significant numbers.

And it’s all thanks to you…and a motorcycle mechanic named Somsak.

Somsak Rinnasak, a native Thai, gave his life to Jesus at age 22. He came from a nominally Christian home where he rarely attended church. However, When Somsak and his wife relocated to Chon Daen, a rural district with less than 100,000 people, he learned that the nearest church was 80 miles away. With his passion for Jesus ignited by a local evangelism service, he decided to
take action. 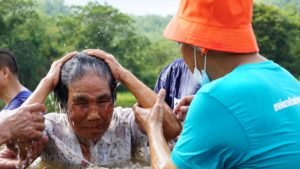 In 1984, with only a ninth grade education and no theological training, Somsak started a church in his home. The only members were himself, his wife, his children, and an elderly Christian woman. They studied the Bible passionately so they could explain their faith to others. Guided by the apostles’ evangelism described in the Book of Acts, they began telling their neighbors about Jesus.

Their humble words, free of the polished “Christianese” used by Western missionaries, resonated deeply with the Buddhist Thais.

Guided by the apostles’ evangelism described in the Book of Acts, they began telling their neighbors about Jesus.

As people began coming to Jesus, Somsak encouraged them to share their newfound faith and gather centrally at his house church. However, the church-planting movement took off in 2016 when the king of Thailand died. Forbidden from holding their usual Christmas celebration during the national mourning period, church members went from village to village and house to house, telling everyone about Jesus. More than 700 accepted Christ.

Today, the movement has 18,000 Christians—and their numbers grow daily.

A few years ago, Somsak founded the Free in Jesus Christ Church Association (FJCCA) to help organize and lead this indigenous revival. Aside from the dire need for trained pastors, there was another problem: these new congregations, mostly made up of rural farmers, couldn’t afford to build permanent churches. A local pastor connected Somsak to ICM partner Charlie Milbrodt, with Living Word Ministries International (LWMI), who was planting churches and ministering to children in the Chiang Mai Province. Charlie introduced Somsak to ICM to begin the process of becoming one of our trusted partners. 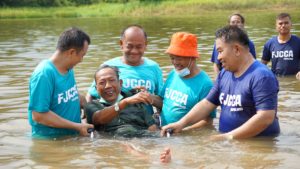 Since then, generous supporters like you have helped FJCCA congregations to build eight churches in Central Thailand. Your support also allowed us to conduct a rollout of our discipleship material to 200 local pastors in 2018. Dozens of house churches have been planted as a result. 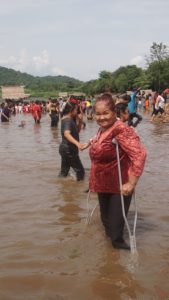 On September 6, with pandemic restrictions finally lifted in Thailand, new believers from 200 villages gathered in Chon Daen to receive baptism. One elderly woman entered the water on crutches. Another man, in a wheelchair. Many were accompanied by the friend who led them to Christ. The event was a celebration of God’s grace and provision for His people in Thailand.

Today, Somsak and FJCC are working with us to make ICM’s discipleship content more relevant and accessible to rural Thais. They are also planning to build a training center that will allow Somsak to train more pastors to lead the hundreds of house churches that FJCC has planted. Dozens of pastoral candidates currently crowd into his home for training.

With your support, these 1,400 baptized in Thailand will be just the beginning.