The members of Solntsevka Church in Siberia gasped when they heard the news in early 2020.

Russia was going into lockdown to fight the COVID-19 pandemic. That meant the team of German builders scheduled to help build their new ICM church wouldn’t be coming this year.

It was a tough blow. To avoid the brutal Siberian winters, congregations must plan church constructions a full year in advance. And Solntsevka had been waiting much longer than that for their new church. To make room for their growing membership over the years, they had renovated their original Prayer House several times—putting off a new construction to help the needy in their community. Now, at 181 members, they were bursting at the seams.

After some discussion, one man rose from the group.

“I guess we will have to build it ourselves,” he said, “and trust God to do the rest.”

By mid-May, the church’s walls rose solidly from the foundation that had been laid the previous spring. To ensure the work could progress under Russia’s social-distancing requirements, the laborers had worked in three shifts. Now all that remained was the roof. And that was a problem.

Not just anyone could build the roof. It was a complex job that required an expert team, and that team was in Germany. In a rural town of only 2,100 people, no one else was qualified to build it. Solntsevka Church had no choice but to wait and see if the lockdown would end in time.

A month passed. Then two. Then three. The congregation watched anxiously as the precious summer months slipped away. The fall rains would start in September, and winter would begin in October. If a miracle didn’t occur by the end of August, they would have to wait another year to finish their church.

So the congregation began to fast and pray.

Two weeks later, Andrey, the church’s pastor, prepared for bed with a heavy heart. The Church had not found anyone who could build the roof. In the morning, on August 29, he would announce his decision to delay the construction until 2021.

Suddenly, Pastor Andrey heard a knock at the door. He opened it and saw a man he didn’t know. “Are you the pastor of the church that has a Prayer House under construction?” the stranger asked. “Yes,” Andrey replied.

“I heard you’re in need of a roof, is that correct? I can help you.”

Over a cup of tea, the man identified himself as a Russian citizen and former resident of Solntsevka. He had emigrated to Germany many years before, where he learned roofing and carpentry. Now retired, he had felt a sudden urge to visit the town of his birth and had made the entire trip by car. Upon arriving in Solntsevka, he had heard about the Prayer House and its need for a roof.

“I don’t go to any church,” he said. “But when I arrived here, my friends told me there was a great need for a roof to be built on the new Prayer House. This was when I understood why I had to come here. Please allow me to help you build this roof.”

Over the next two weeks, the stranger oversaw the construction of the church roof. As soon as it was finished, he got into his car and disappeared as mysteriously as he came. No rain had fallen, either. Pastor Andrey believes God sent an angel to finish the church. 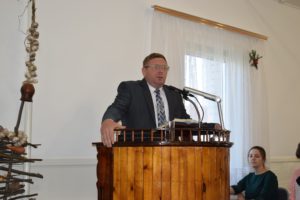 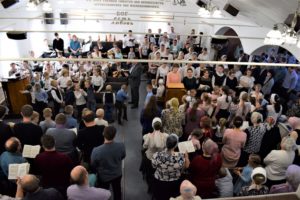 With the roof now on, the congregation was able to insulate the building and prepare for their first worship service—just in time for Christmas. At their Christmas service, they distributed gifts of evangelism material to other Serbian churches that would allow them to share the Gospel with 160,000 people. Our indigenous partner writes,

“Even when the whole world is in lockdown, the heavens are open anytime!”

Your prayers and support for God’s work in Eastern Europe keep that window open and makes testimonies like this possible.

Thank you for being their angel of hope.